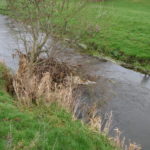 Many thanks to Simon Leopold (Landowner) for continuing to allow the Club to have access across his land.  Clearing the branches and debris from the river provides benefits for us all – stopping flooding and bank erosion as well as clearing up pollution.

The team gathered at Moone Post Office on Sunday 19th February – none of us had been involved with any river maintenance on the River Griese before – so it was first times all round.  Johnnie Griffin, Tom Donohue, Alan Haslam, Joe Heffernan and Seamus Buggle (making a heroic effort to get back from Limeric in record time) made up the crew.  We were joined later for ‘afternoon tea’ by Sinead, Ben and Jamie – a welcome break.

After a walk along the river to survey the situation we split into two teams – myself and Tom along the top at the mill stream and Alan, Johnnie and Joe attacked the trees half way down.  What looked simple standing on the bank proved to be somewhat more challenging when you were actually in the water – fighting a strong current (not quite the same as in the summertime!), deep holes and large waterlogged trunks.  There was also a surprising amount of plastic, expanded polystyrene, signs etc. also caught up in the trees and branches.

Armed with saws, loppers, pruning shears, rope and Johnnies trusty Landrover we pulled out quite a pile of wood, debris and bits of old farmyard stuff.  We finished about 2/3rds of what we wanted to cover – the rest is for next Sunday 26th!

Come along and join in!