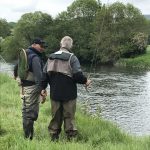 Whilst I am writing this post I have to first give thanks (again) to Peter Churchill – our guest angler from America for getting me out of the house and making it such a fun time.  If you remember Peter was over last year and spent some time on the Greise and Liffey as well as other rivers in Ireland (see previous post).  Well this year he did Mount Juliet and Thomastown first (by himself!) before we linked up down in Clonmel for a couple of days on the Suir. We joined up early on the Thursday morning @ the Clonanav Fly Fishing shop in Ballmacarbry in the Nire Valley.  Peter had done exceptionally well navigating down from around Kilkenny but for some strange reason had chosen the ‘take me along the smallest farm roads in Ireland’ option on his SatNav.  I don’t remember his hair being white or standing on end last year!

I’ve been to the Nire Valley before with the family and knew just how beautiful it is down there – but had never fished either river.  Peter had booked a guide for the day and despite my initial misgivings (typical tight Brit!) it turned out to be money very well spent.  Andrew Ryan (the owner)  was very helpful and we kitted up in the shop (out of the rain!) and both of us decided to take advantage of their very kind offer of using their ‘guest’ rods.  These were #3 weight Hardy’s as we were both looking at trying out lighter rods than usual.

They also sorted out a selection of flies to use – and were strongly recommending using Klinkhammers with a small emerger as the dropper.  Neither of us were experienced with this method and I was more than just a little nervous of getting into some serious tangles (based upon my previous experiences trying more than 1 fly).  Interestingly – all the flies Andrew had on sale were barbless and I have to say that this really added to the challenge.

The guide took us to the Nire River first of all and helped us with setting up the rods.  Peter was ready first and nipped down from the Bridge to the river to try a few test casts out whilst I struggled with the set up.  2nd cast and he was into a decent sized brown trout!  Needless to say there were no more questions about whether the fly selection or leader set up was right. The guide was great and it really helped having local knowledge of where the fish were likely to be – as well as providing much needed feedback on our casting techniques (or lack of in my case) and tuition to correct the inevitable bad habits that creep in (again and again!).  Finding your way up an unknown river on the look out for fish without help will often lead to missing out on the good chance of actually catching – we were both successful on several occasions as we moved further up this beautiful river. The guide took us back to the shop for lunch and a look at the selection of rods, reels etc. on offer.  I had been so impressed with my ‘guest’ Hardy rod that I determined to buy one – although I couldn’t afford the top of the range that I had been using!  On production of my River Griese club card Andrew did me a deal on a very nice 8ft. #3 weight rod and accompanying reel.  Andrew offered to set up the reel with backing line etc. so that it would be ready to use later on.

Next stop the River Suir….. The guide drove us along the Suir and before taking us to the chosen beat also showed us several spots where we could fish on the Friday without him guiding.  Again really good to have the local knowledge so readily offered.  We parked up on their own private land close to the Suir and once more got down to business. Peter discussing tactics – where are the stinging nettles!?

Peter developed quite a close relationship with the guide – although I never managed to catch them actually holding hands as they walked along the bank. Once more we were straight into the fish – to the extent that Peter later proclaimed it to be the best day’s brown trout fishing that he’d ever had!  He was standing in the river casting across a pool and practically every 3rd cast was drawing a good sized fish.  My section wasn’t so prolific – but the fish were even larger!  However it was now getting late in the day and although myself and Peter would have kept fishing (as the fish showed no signs of going home!) the guide needed to get back to the shop.

Going back to the point about barbless hooks – we both lost many fish that were ‘hooked’ and played but managed to lose the fly.  It certainly highlights your technique for actually catching and landing your fish.  A fish running at you really makes you work when you know that the hook will shortly be coming out if you don’t do something! At this point Peter decided to show me a new technique he was trying in the States – I’m not sure whether it will catch on over here but the fish should be happy.  It appears that the trick is to hold on to the line tightly and try and hit the fish by throwing your rod reel first. We finished the day happy (and wet – my waders leaked) and looking forward to Friday.  We were staying locally (Andrews mum runs the excellent local B&B only 2 mins away from the shop) and went to Clonmel for dinner.  Walking alongside the Suir that evening we saw plenty of fish of all sizes just waiting to be caught!

After an excellent breakfast we went back to the River Nire to fish until lunchtime – there were several large brownies that we had seen that I was determined to get on the bank.  Despite several near misses we were not as successful as on the previous day – and we both wanted to move on and try the Suir again. On the Suir we did catch – but not to the same extent as to the day before.  The wind was stronger and I was determined to go with my new #3 weight – I probably should have gone back to my trusty 10ft #5/6 weight to get across the wind and out further into the current. We once again stayed the night at the B&B and ate out in Clonmel – and on the Saturday morning drove across to Thomastown for a few hours on the Nore.  Peter had fished there earlier in the week and enjoyed it.  However there appears to be a problem with access downstream from the bridge and along the river round the GAA pitches so we were restricted to the Bridge and upstream.

Both of us caught small brownies with sufficient ‘action’ to make it fun.  There were large numbers of fish to be seen – but they were not interested in flies at all.  The path along the river is used by families and walkers a lot and I suspect that the fish there are used to readily available picnic leftovers. We finished up early afternoon and then headed back home – completely fished out!

The more perceptive of you will have noticed that there are no pictures of actual fish in this posting.  My excuse is catch and release – it’s far easier to get the fish quickly back into the water than struggling to get the camera out and then dropping it in the river.  Peter did sent me some pictures – but I’ve managed to lose them somewhere.

My thanks again go to Peter for being such an enthusiastic guest and great entertainment.  The challenge now is to return the effort and get over to his part of the world.

Additional thanks go to Andrew Ryan at Clonanav Fly Fishing – a professional and friendly team who clearly love what they do.