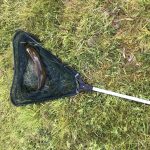 Frustrating day at work – went home early and just needed to fish!  Called Dermot Page and popped down to Rathcon just before 6pm.  Only myself and another fishing – perfect!

Some early action and then it went quiet but some fish were rising at odd times for flies (not mine though).  Kept at it and a small rise started around 8pm’ish – lost 1 large one (and the fly as I had on only a 3lb leader).  I put on 6lb and had several false takes before a 3-4lb brownie took it on the retrieve.  A bit of a struggle and it went into the net.

Good fun spent trying to tempt another but eventually moved from the ‘dam’ end of the lake towards the clubhouse.  Once again the rise started and this time a rainbow took the fly on the retrieve.

Had a bit of a chat with Dermots father late on and he reckoned most of the action was still sub-surface.  However – the water is crystal clear at the moment and I get a feeling that with more insect life to come and the evenings sorting themselves out there should be great action for dry flies!