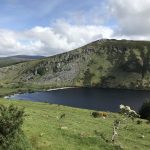 Problem – how to ‘help’ with a scouts camping weekend and get a bit of fishing in at the same time – whilst still keeping one’s partner happy?

Answer – book a B&B within walking distance of the camping (for Sinead) that is only a short hike to the fishing (for me).

We dropped the boys off on late Friday afternoon and helped them to set up camp alongside Lough Dan.  We’d stopped off first in Holywood on the way into the Wicklow Mountains in order to try out the newly opened Holywood Cafe.  Very good – excellent wood fired pizza’s enjoyed by the boys!  We left them to their campfire and sing song and drove off up to the top of the hill.

We stayed in Lough Dan House and were wonderfully looked after by Theresa and Sean.  I’d called Sean the week before to check out the fishing – and it turns out that he is an enthusiastic septuagenarian angler – as well as being tour guide, driver, farmer, builder, environmentalist and historian.

Before we get to the fishing – a few views…. the scout camp is back down the lough on the right hand side.  Access for fishing is only through private landowners permission. The view around the top of the bluff towards the top of the valley.  This is where the river weaves through the flood plain and enters the lough alongside the beach.  There is a long sandbar stretching along the left bank of the lough that is wadeable for 80-100 yards.  The hillside looks a gentle descent from this angle – don’t be fooled – whilst there is a good path – it is hard going in places due to the continuous rise/fall of the landscape. A strong wind was coming straight down the valley making a backcast very difficult. The picture above give no idea of scale.  There is a good 30 minutes of walking up and over the mountain to get to the lough – in full wading gear on a warm day you’d better not forget anything!  Later on in the day there are midges to contend with – so put on a good repellent and your hat!

Fishing along the beach into the lough was easier but still impacted by the wind…. moving further to be sheltered by the trees was much better and I actually had several takes here – but there was little room for error with the casting.

I decided that the lough would have to wait and that I’d try the river itself.  From a distance it doesn’t look promising – but this is where the perspective is all wrong!  The river is actually quite a decent size but just looks small because of the closeness and size of the sides of the valley.  It winds back up the valley and there are many interesting features.

All the fish caught (and lost!) were only interested in a dry fly and produced some great action.  The takes were sudden and quite vicious.  I kept my dropper in place hoping that it would bring up something big – but although there were no fish on view at the surface the only action was with the dry fly on the surface. These are typical shots of the river as it meanders along the left hand side of the valley – very dark and peaty.  However – whilst a strike inevitably happened – after that first strike you have to move on as it appears that all the fish in that section get spooked.  I spent far too long learning that lesson – determined to catch the big one that came off my barbless hook! Ever get the feeling that something is watching you? The hills have ewes! Further up the valley the river gets a lot shallower and narrower – but there are still fish to be had. I managed to catch several brownies in the river as well as lose several!  These were not naive little things but very wily and quick on the take.  I was surprised several times as a trout seemed to rocket straight up out of nowhere and attack the fly. I came back late afternoon a very satisfied angler – having had a really enjoyable day with many challenges to overcome.  This was not a day where you rock up, pay your fee and expect to catch – this was a day when you had to earn the right to be in the right place and work to get (and keep) that fish on your hook.

We drove off to end the day with a great meal at the Roundwood Inn (fantastic food and great staff) sitting in front of the open fire – leaving the boys and the other Leaders to their camp fires, sing songs and midges.

I can’t recommend Theresa and Sean @ Lough Dan B&B enough to anglers, nature lovers and walkers.  Peaceful, stunning location overlooking the lough and Sean has enough stories to fill many a book.